The Sensitive Natural Zone of the Rimets

The Vercors : a former tropical sea!

The zone of the Rimets gives the opportunity to explain all the history of the Vercors formation by describing the wonderful countryside in front of us. 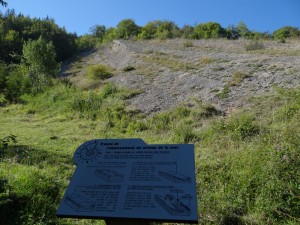 The fossilized valley of the Rimets is located at 500 meters from the gîte.

It’s the most beautiful example of a valley incised in a carbonate platform (former coral reef developed in a warm sea with low depth). The site has a serious interest for a geological point of view as well as for the flora and fauna. Out of this valley of more than 100 million years old, there is one witness left and noticeable: a small cliff that marked it out on the left side, which is today sloping by the puckering.

The Rencurel municipality and the Isere General Council decided to classify the Rimets site as a Sensitive Natural Zone.

A project of protection and interpretation was adopted to protect the site (to avoid scrubs), to highlight it and to open it to the public.

Some layouts were made in order to facilitate the visit of the site. The oven on ruin located at the entrance was renovated and has an observation platform with several signs to understand and interpret what is in front of us.
Laissez un commentaire    Si vous souhaitez me poser une question, merci d'utiliser la page contact
Pierre - Gîte des Rimets - February 25 2014 17:59